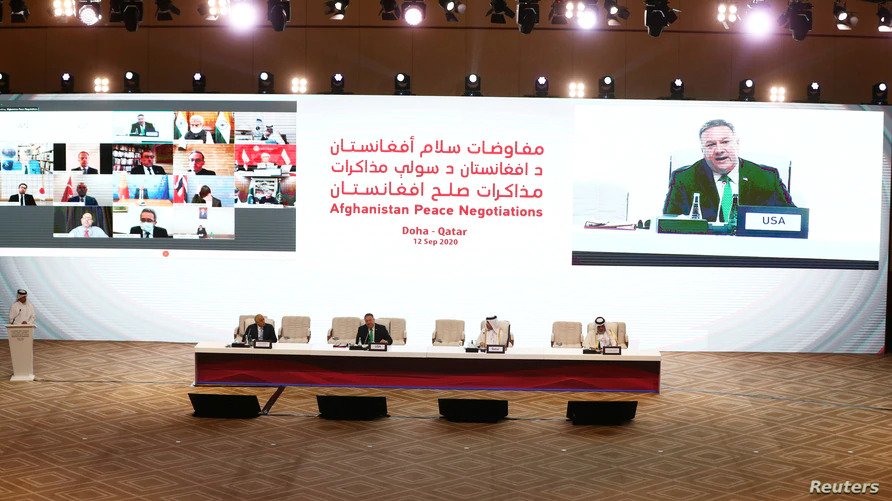 ISLAMABAD – Afghanistan endured momentous developments in 2020 and despite months of negotiations over peace talks, had no big breakthrough. But some observers say they see signs that the conflict-torn nation may now be on a more solid path toward peace.

The year began with high expectations for the South Asian country’s long war unleashed nearly two decades ago following an invasion by the United States and its allies.

The foreign military intervention, which came in response to the September 11, 2001, terrorist attacks on the U.S., ousted the Islamist Taliban from power for harboring al-Qaida leaders accused of planning the carnage.

After nearly two decades of war that has killed an estimated minimum of  160,000 people, the U.S. sealed a landmark troop withdrawal deal with the insurgent Taliban in late February aimed at winding down America’s longest overseas combat mission.

The agreement requires all U.S. and allied forces to be out of Afghanistan by May 2021 in return for guarantees the Taliban will not allow foreign militant groups to use Afghan soil as a base to plan terror attacks. The insurgents also pledged to negotiate a lasting peace with the Kabul government.

Outgoing U.S. President Donald Trump later in the year suggested he favored bringing all American troops home by Christmas, though he ended up authorizing withdrawal of 2,000 soldiers by mid-January to bring down to 2,500 the number of U.S. personnel in Afghanistan.

The so-called intra-Afghan negotiations, which include representatives from the Taliban and the Afghan government, started in September, and a second phase of the process will resume January 5 after a break of three weeks. It took the two negotiating teams three months to reach an agreement on the rules for conducting the talks.

That timetable has drawn criticism from some, but not all observers.

Deborah Lyons, U.N. special envoy for Afghanistan, told the Security Council on December 17 that the Afghan parties to the conflict have made “incremental, but genuine progress” in their peace talks.

“As the year draws to a close, we must acknowledge that 2020 has brought a profound shift for this country … By all accounts this was a big year,” she said.

Lyons cautioned, however, the unrelenting Afghan violence remains a “serious obstacle” to peace and a threat to the region, noting with concern a marked increase in civilian casualties across the country in the last quarter of 2020.

The U.N. documented nearly 6,000 civilian casualties in the first nine months of the year, representing a 30% drop from the same period in 2019.

But civilian casualties since October have risen more than 60% compared with last year, mainly due to improvised explosive devices planted by anti-government forces.

A string of mostly unclaimed targeted attacks in the country, particularly in Kabul, killed hundreds of people since the opening of intra-Afghan peace talks in Doha, Qatar. High-profile officials, civil society activists and journalists were among the victims.

Both the Taliban and Afghan government officials blamed each other for intensifying battlefield hostilities and other violence, prompting Washington to consistently press the two adversaries to move quickly toward a political deal and a lasting cease-fire.

“It’s easy to forget, amid the intensifying violence and other bad news, that the year will end with Afghanistan closer to peace than at any other time over the last few decades,” said Michael Kugelman, deputy director of the Asia program at Washington’s Wilson Center.

“And yet, it’s going to be a long, hard slog. If there’s a settlement that ends the war, it’s going to take time that will be measured in years not months,” cautioned Kugelman.

The intra-Afghan talks were originally set to open within two weeks of the singing of the U.S.-Taliban agreement but were delayed for six months because of disputes over a prisoner exchange between the insurgent group and Kabul.

The slow-moving U.S.-brokered process saw the release of 5,000 Taliban prisoners in return for 1,000 Afghan security forces, paving the way for launching the much-awaited peace talks on September 12.

Analysts insisted the withdrawal of U.S. troops at the same time undermined the Afghan government’s bargaining position at the table and emboldened the Taliban to be less flexible.

U.S. military officials and diplomats also expressed concerns over the rise in Taliban attacks. Afghan officials accused the insurgents of not living up to their public pledges to reduce violence and cut ties to terror groups, including al-Qaida, charges the Taliban denied.

Marvin Weinbaum, director for Afghanistan and Pakistan studies at the Middle East Institute, said, however, that sustaining the peace process in the next phase is “very much in the hands of the Afghans themselves” and it will remain so in coming months.

“And what I am sadly concluding is that I see the prospects here as being rather limited,” Weinbaum told a recent virtual event arranged by Pakistan-based Jinnah Institute think tank.

The election victory of former vice president Joe Biden generated a heated debate toward the end of the year on whether the incoming U.S. administration will sustain the Trump policy he introduced to end what he often referred to as America’s endless war.

“The U.S.’s role I believe is a diminishing one as we extricate ourselves, and we may very well under a Biden administration,” Weinbaum argued.

Biden during his election campaign largely supported the policy but he called for stationing a counterterrorism force in Afghanistan to guard the U.S. against future terrorist strikes.

For their part, the Taliban maintained that the presence of even a single foreign solider on Afghan soil beyond the timeline outlined in the agreement with the U.S. would mean continuation of the war.

Taliban political chief Mullah Baradar, who signed the agreement with the U.S., reiterated to an international webinar in December his group was fully committed to move the peace process forward in line with the pact.

“The agreement specifies the withdrawal of all foreign forces from Afghanistan within the agreed timeline and commits the Islamic Emirate (the name Taliban uses for its ousted government) to not allowing the soil of Afghanistan be used against the security of any country. This serves as a practical basis for establishing enduring peace in Afghanistan,” Baradar said.

The Taliban leader reiterated his group was seeking “an inclusive Islamic government with all Afghans.” The insurgents have from the outset been dismissing the current political governance system as illegal and a product of the U.S. occupation of Afghanistan.

“What we have witnessed is the great difficulty in arranging any kind of future for Afghanistan where the contestant parties have a similar vision of what Afghanistan should be,” Weinbaum said, while underscoring the difficulty the peace process will face after the rival Afghan parties return to the table in the new year.