Democrats Are Making the Amy Coney Barrett Hearings All About Healthcare 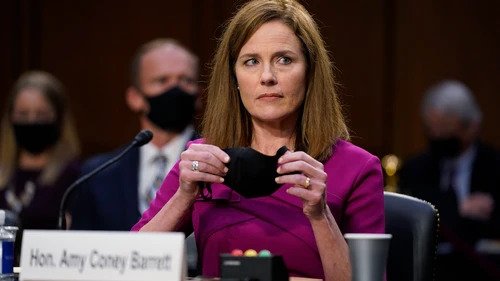 Democrats are essentially powerless to stop the speedy confirmation of Judge Amy Coney Barrett to the Supreme Court, so on the first day of her confirmation hearings, they zeroed in on one thing sure to resonate with voters caught in the middle of a pandemic: healthcare.

One after another, Democrats on the Senate Judiciary Committee pulled up photos and shared stories of their constituents whose lives, they said, had been changed for the better since the creation of the Affordable Care Act.ADVERTISEMENT

They repeatedly stressed the fact that the Supreme Court is set to hear yet another challenge to the Affordable Care Act on November 10—just one week after the presidential election on November 3—and that a Justice Barrett could imperil its future.

“You have been nominated by a president who shows contempt for the Constitution but does not hesitate to tell his loyal followers that you are being sent to the bench to do his political chores, abolish the ACA, rule in his favor on any election contest, and even more,” Durbin told Barrett, who currently serves on the U.S. Court of Appeals for the 7th Circuit and has previously criticized parts of the Affordable Care Act. “You cannot feel good about a president cheapening this historic moment.”

The Monday hearing, which included only opening statements and no questioning of Barrett, is only the first of a scheduled four days of hearings. But the rancor on both sides was clear, as senators repeatedly accused one another of politicizing the Supreme Court and the nomination process.

Democrats slammed Republicans for, in their view, rushing through Barrett’s confirmation just days ahead of an election that President Donald Trump is not expected to win. Back in 2016, when Justice Antonin Scalia died, Senate Majority Leader Mitch McConnell successfully blocked President Barack Obama’s chosen replacement, Judge Merrick Garland, from ascending to the Supreme Court.News

Democrats Have Basically Given Up on Stopping Amy Coney Barrett

At the time, McConnell argued that Garland should join the bench because it was an election year and the American people should be given a chance to vote first. But, Sen. Patrick Leahy pointed out, McConnell announced his plan to speedily replace Justice Ruth Bader Ginsburg just hours after her death in mid-September.

“Instead of talking about COVID and doing something to help the American people, we’re engaged in this mad rush to fulfill a Supreme Court vacancy on the eve of a presidential election,” Leahy said. “The Republicans announced their intention to fill Justice Ginsburg’s seat just one hour after her death. From that moment, this process has been nothing but shameful.”ADVERTISEMENT

The Affordable Care Act, Leahy added, is now “at the top of the hit list.”News

At least one Democrat, Minnesota Sen. Amy Klobuchar, recognized that there was very little the minority can do to stop Barrett’s confirmation. With a 53-47 majority in the Senate, Republicans likely have the votes they need to confirm her, even though two senators—Sens. Susan Collins of Maine and Lisa Murkowski of Alaska—have indicated that they will not vote for Barrett ahead of the election.

“To all Americans: We don’t have some clever procedural way to stop this sham, to stop them from rushing through a nominee,” Klobuchar said. Instead, the Democratic senator—who wore a mask emblazoned with the word “VOTE”—urged people to call their senators and complain.

Republicans, meanwhile, tried to frame Democrats’ reservations as an attack on religion. Barrett is a devout Catholic and, as an individual, has suggested that she holds deeply traditional views on issues like abortion and LGTBQ rights—views that, according to the GOP, would have no bearing on her professional life as a judge.

In recent days, Barrett has also faced scrutiny for her ties to People of Praise, a charismatic Christian community for which Barrett reportedly once served as a kind of spiritual adviser called a “handmaid.” Former members have told outlets like the Washington Post and the Associated Press that People of Praise holds conservative beliefs about women’s roles and grants them less status within the group.ADVERTISEMENT

Missouri Sen. Josh Hawley, a Republican, took direct aim at those reports; at one point, he even brandished a newspaper as a prop.

“Judge Barrett is a Catholic. We all know that. She’s a devout Catholic. We all know that. She and her husband have chosen to raise their family in accordance with their religious beliefs,” Hawley said, before adding that millions of Americans adhere to various versions of Christianity. “Are they to be told that they cannot serve in public office, that they are not welcome in the public sphere?”

“I, for one, do not want to live in such an America,” Hawley added.

None of the Democrats brought up Barrett’s faith during the Monday hearing. In fact, in a press conference, Durbin said that he had no knowledge of any Democrats who intended to bring it up at all. Former Vice President Joe Biden, the Democratic nominee for president and a practicing Catholic, also told reporters that he did not think that senators should ask Barrett about her religion.

“This is about, whether in less than one month, Americans are going to be forced to lose their health care insurance,” Biden said.

The specter of Justice Brett Kavanaugh, the most recent justice to be confirmed to the Supreme Court, also haunted the proceedings, as multiple Republicans suggested that the hearing over the sexual assault allegation against him was driven by partisanship. Louisiana Sen. John Kennedy called that hearing “a freak show” and compared it to a scene out of Star Wars.

Although senators were given the option to participate in the hearing remotely, few took advantage. Although North Carolina Sen. Thom Tillis, a Republican who’d tested positive 10 days before, appeared remotely, Utah Republican Sen. Mike Lee appeared in person despite his own recent positive test and subsequent isolation.

He spoke without a mask.