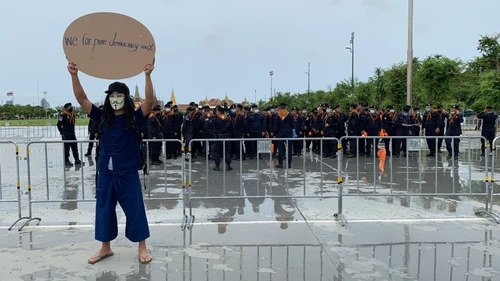 When Thai web designer Nottajorn updated her Tinder profile with a protest photo from Bangkok’s democracy monument, she intended to send a message.

“I want people to know that I am interested in politics – so much that I’d go to a protest,” the 28-year-old told VICE News. “This is to filter out those who aren’t. They can swipe left on me.”

Decades of coups, street protests and gaping inequality have left Thais divided over how their country should be run. But young supporters of a new pro-democracy movement are now advertising where they stand on dating apps and other online platforms, making clear this is an area where differences can’t be overlooked.

On Tinder, for instance, users may post photos of themselves at protests or declare no interest in dating anyone who does not believe in democracy. They have added “no salim” or “not a salim” to their profile. “Salim” – the name of a multicolored Thai dessert of sweet noodles and coconut milk – is slang for backers of the military-aligned government led by Prime Minister Prayut Chan-O-cha. ADVERTISEMENT

A former army chief, Prayut led the 2014 coup that overthrew a democratically elected government and cemented his grip on power after elections in 2019 that were marred by irregularities. He and other generals are also closely linked to the monarchy, which has become a focal point of growing calls for democratic reforms.

“Politics is not like liking different styles of music. Your political views say something about what your values in life are,” Nottajorn said, adding that supporting Prayut sends a signal that you do not care about justice, human rights, or freedom of speech.

“For people my age who are in the midst of building our future, it seems like we have no future, so we have to do something to build a better future for ourselves. Therefore, it’s important to date someone who values these things,” she said.

Cho, a 26-year-old software developer and DJ, who like several others interviewed for this article asked to be identified by their first name only for privacy reasons, agreed.

“People who love Prayut would normally say things like ‘the poor people are poor because they are lazy,'” Cho told VICE News. “And that is a reflection on their personality – that they lack compassion and have low empathy.”

Despite the surging popularity of dating apps in Thailand, not everyone is open about their political leanings online, and disputes can appear after a relationship just gets going. That happened to retail store manager Aridhat Kheosopa. “I recently had an experience dating someone who I later found out supported Prayut, I ended up ghosting him. Thank you, next,” he said, quoting an Ariana Grande song.World News

But in other cases, having similar views can help bring like-minded singles together. One 34-year-old veterinarian who asked to remain anonymous said on her Tinder profile that she is even looking for people interested in going to protests with her.

“I want to be upfront about my political views so we don’t end up wasting each other’s time,” she told VICE News. “Things will not work out if you support the dictatorship.”ADVERTISEMENT

The internet has become the latest battleground in Thailand’s turbulent politics as young organizers break with tradition and debate taboo topics with unprecedented boldness. Social media companies have found themselves caught in the middle of demands for free expression and Thailand’s attempt to control dissent online.

Thailand’s digital economy minister has filed legal complaints against Facebook and Twitter for not taking down posts deemed offensive to either the government or the monarchy, which is normally shielded from criticism by royal defamation laws. Facebook has also said it would challenge an order to restrict access to a popular page critical of the monarchy.

Tinder has reportedly been drawn into the dispute, as some users claimed their accounts were suspended after sharing pro-democracy content, according to researchers writing in Foreign Policy. Tinder did not immediately respond to requests for comment from VICE News.

While social media platforms have been mainly leveraged by pro-democracy protest figures, Twitter said last week that it removed nearly 1,000 accounts linked to the Royal Thai Army for information operations, which a spokesperson later denied.

Some young Thais said they would be open to dating someone from another political party that they didn’t vote for, but too close a connection with the military’s Phalang Pracharat party was a non-starter.

“I don’t think I’m right about everything. It would be nice to date someone who can challenge me,” said 22-year-old French language tutor Surachai Rukniwed.

Still, he left the option open for a more casual encounter, maybe even a fling where he’d have to weigh the benefits of a brief romantic encounter against his moral and political beliefs.

“It depends,” he said, laughing.