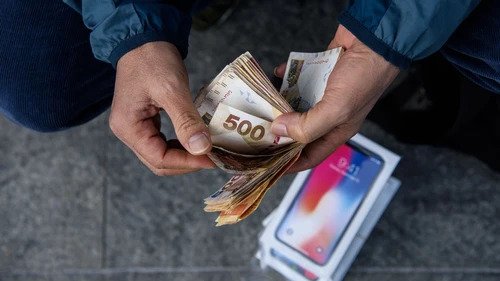 A team of Australian scientists has discovered that the virus responsible for COVID-19 can survive on the screens of smartphones, ATMs and self-serve checkouts, along with both paper and polymer banknotes for up to 28 days. Which is about seven times longer than previously thought.

Researchers from the Commonwealth Scientific and Industrial Research Organisation (CSIRO), Australia’s peak scientific body, studied the amount of time it took for samples of the coronavirus to become inactive when left on a range of contaminated surfaces and objects, or “fomites”, at the various temperatures of 20 degrees celsius, 30 degrees celsius and 40 degrees celsius.ADVERTISEMENT

What they found was that the virus survived longest on smooth, non-porous surfaces, such as glass and plastic, as opposed to more porous surfaces, like cotton or pieces of clothing.Entertainment

Researchers also found that the virus tended to last longer in lower temperatures, as “Increasing the temperature… drastically reduced the survivability of the virus to as little as 24 hours at 40 degrees celsius.”

“The persistence of SARS-CoV-2 on glass and vinyl (both common screen and screen protector materials) suggests that touchscreen devices may provide a potential source of transmission, and should regularly be disinfected especially in multi-user environments,” they added.World News

But while such virus-hospitable surfaces significantly increase the risk of someone picking up the contamination on their skin—particularly in high-traffic instances, like self-serve checkouts and airport check-in terminals—it is still “fingertip to mouth” that poses the greatest risk of transmission, as the virus needs to enter the body in order to infect a host.

In a paper published in BioMed Central’s Virology Journal last week, the CSIRO team concluded from their findings  that “SARS-CoV-2 can remain infectious for significantly longer time periods than generally considered possible”, and that “These results could be used to inform improved risk mitigation procedures to prevent the fomite spread of COVID-19.”

The most immediate of those risk mitigation procedures, though, seems to be the tried and tested advice that experts have been espousing from the beginning: just keep washing your hands.